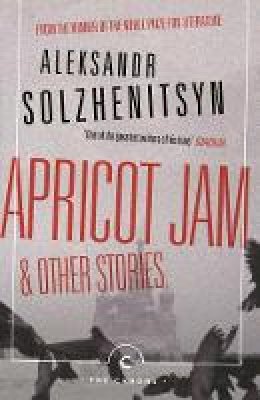 Apricot Jam and Other Stories (Canons)

Description for Apricot Jam and Other Stories (Canons) Paperback.
In this, his atmospheric final work of fiction, the Nobel Prize-winning author of One Day in the Life of Ivan Denisovich introduces an unforgettable set of characters whose day-to-day lives are transformed under the pressures of Soviet rule. These stories confirm Solzhenitsyn's position alongside Tolstoy, Dostoyevsky and Gogol as one of Russia's great writers.

About Aleksandr Solzhenitsyn
Aleksandr Solzhenitsyn was awarded the Nobel Prize in Literature in 1970 and his work continues to receive international acclaim. Through his writings, particularly The Gulag Archipelago and One Day in the Life of Ivan Denisovich, he helped to make the world aware of the Gulag, the Soviet Union's forced labour camp system. He was expelled from the Soviet Union in ... Read more1974 and returned to Russia in 1994. He died in 2008. These stories have been translated by Kenneth Lantz and Stephan Solzhenitsyn. Show Less

A remarkable human being, a visionary, a crusader in the simplest sense, who was steered in his writing, as in his actions, by a deep sense of justice

What was forgotten was how great a writer Solzhenitsyn ... Read morewas. But now we are reminded with these nine short stories written shortly after his return to Russia and published posthumously in an excellent translation . . . The more experimental 'binary' or two-part tales, which dominate this collection, share the qualities of Solzhenitsyn's finest prose: its precision and visual clarity; the subtle irony and humour of its tone; its moral truth; and the skilful crafting and shaping of the story for emotional effect

Read these stories for a reminder of an extraordinary life, for the range of the interests they encompass and for a pugnacious moral energy that even the octogenarian writer was hard pressed to tame

In terms of the effect he has had on history, Solzhenitsyn is the dominant writer of [the twentieth] century
David Remnick

Described by scholars as ranking alongside his best work . . . one of the publishing events of the autumn

In probing the relationship between action and belief during times of crisis, Solzhenitsyn is unsurpassed

A great book . . . absolutely terrific
John Carey With its unapologetic moralising and blunt irony, Apricot Jam is a perfect introduction to the stories in this volume. The binary method is essentially a satirical device, designed to capture the doubleness - and double-facedness - of Russian life under communism

Goodreads reviews for Apricot Jam and Other Stories (Canons)