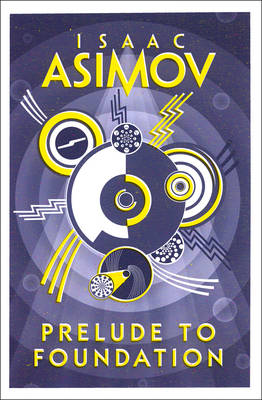 Description for Prelude to Foundation Paperback.
WINNER OF THE HUGO AWARD FOR BEST ALL-TIME SERIES The Foundation series is Isaac Asimov's iconic masterpiece. Unfolding against the backdrop of a crumbling Galactic Empire, the story of Hari Seldon's two Foundations is a lasting testament to an extraordinary imagination, one whose unprecedented scale shaped science fiction as we know it today. In a time before the Foundations, psychohistory's creator Hari Seldon is made to stand before the Emperor ... Read moreof the crumbling Galactic Empire to present how his scientific theory of predicting the future might be applied to the real world. However, Hari refuses to deploy his theory for political gain, setting off instead with reporter Chetter Hummin in quest of a place to safely apply his theory: Earth, the original home of humanity. All records of Earth have been lost to time. Hari will therefore have to look back into the past, in order to seal the future of humanity for ever. Show Less

About Isaac Asimov
Isaac Asimov, world maestro of science fiction, was born in Russia near Smolensk in 1920 and was brought to the United States by his parents three years later. He grew up in Brooklyn where he went to grammar school and at the age of eight he gained his citizen papers. A remarkable memory helped him finish high school before he ... Read morewas sixteen. He then went on to Columbia University and resolved to become a chemist rather than follow the medical career his father had in mind for him. He graduated in chemistry and after a short spell in the Army he gained his doctorate in 1949 and qualified as an instructor in biochemistry at Boston University School of Medicine where he became Associate Professor in 1955, doing research in nucleic acid. Increasingly, however, the pressures of chemical research conflicted with his aspirations in the literary field, and in 1958 he retired to full-time authorship while retaining his connection with the University. Asimov's fantastic career as a science fiction writer began in 1939 with the appearance of a short story, `Marooned Off Vesta', in Amazing Stories. Thereafter he became a regular contributor to the leading SF magazines of the day including Astounding, Astonishing Stories, Super Science Stories and Galaxy. He won the Hugo Award four times and the Nebula Award once. With nearly five hundred books to his credit and several hundred articles, Asimov's output was prolific by any standards. Apart from his many world-famous science fiction works, Asimov also wrote highly successful detective mystery stories, a four-volume History of North America, a two-volume Guide to the Bible, a biographical dictionary, encyclopaedias, textbooks and an impressive list of books on many aspects of science, as well as two volumes of autobiography. Isaac Asimov died in 1992 at the age of 72. Show Less

Reviews for Prelude to Foundation
`One of the most staggering achievements in modern SF' The Times `Isaac Asimov was one of the great explainers of the age...It will never be known how many practicing scientists today, in how many countries, owe their initial inspiration to a book, article, or ... Read moreshort story by Isaac Asimov' Carl Sagan `Asimov displayed one of the most dynamic imaginations in science fiction' Daily Telegraph `Asimov's career was one of the most formidable in science fiction' The Times Show Less

Goodreads reviews for Prelude to Foundation