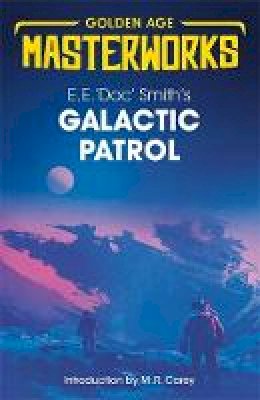 Description for Galactic Patrol (Golden Age Masterworks) Paperback.
The space-pirates of Boskone raided at will, menacing the whole structure of interstellar civilization. Master-minded by a super-scientist, their conquering fleets outgunned even the mighty space cruisers of the Galactic Patrol. When Lensman Kim Kinnison of the Patrol discovered the secret Boskonian base, it was invulnerable to outside attack. But where a battle-fleet would meet insuperable resistance, a single infiltrator might penetrate the Boskonian defenses - if he had the guts to take on million-to-one odds. Kinnison had guts enough to take on the odds - even with the future of the civilized Universe riding on his ... Read moreshoulders . . . Galactic Patrol is the first self-contained novel in E. E. 'Doc' Smith's epic Lensman series, one of the all-time classics of adventurous, galaxy-spanning science fiction. Show Less