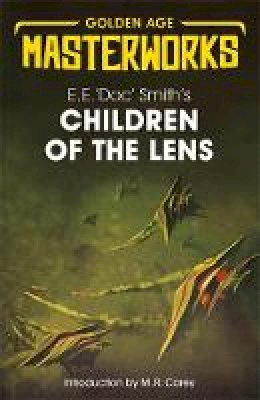 Description for Children of the Lens (Golden Age Masterworks) Paperback.
It was beginning to look as though no one could prevent the annihilation of the civilized Universe. For a weird intelligence was directing the destruction of all civilization from the icy depths of outer space. Kim Kinnison of the Galactic Patrol was one of the few men who knew how near the end was. And in the last desperate stratagem to save the Universe from total destruction, he knew he had to use his children as bait for the evil powers of the hell-planet Ploor . . . Children of the Lens is ... Read morethe sixth self-contained novel in E. E. 'Doc' Smith's epic Lensman series, one of the all-time classics of adventurous, galaxy-spanning science fiction. Show Less

Reviews for Children of the Lens (Golden Age Masterworks)

Goodreads reviews for Children of the Lens (Golden Age Masterworks)