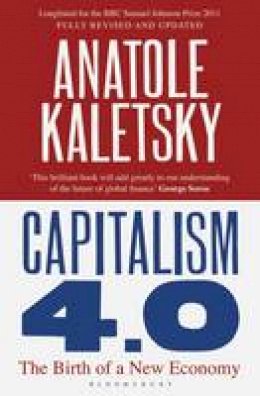 Capitalism 4.0: The Birth of a New Economy

Description for Capitalism 4.0: The Birth of a New Economy Paperback. The definitive book about the state of Capitalism; now and in the future, that debunks myths and presents groundbreaking new theories Num Pages: 448 pages, Illustrations. BIC Classification: KCS; KCX. Category: (G) General (US: Trade). Dimension: 198 x 129 x 30. Weight in Grams: 306.
The global financial crisis of 2007 to 2009 ruined businesses and banks, individuals and even nations, and seemed to land a mortal blow to the capitalist system. But capitalism was not destroyed, rather it was irrevocably altered: the forces that precipitated the crisis are now contributing to the evolution of a new, stronger version of the capitalist model. Tracing the development of capitalism from the late eighteenth century through three distinct historical phases, Kaletsky shows how at each of these transitions the existing economic order appeared to be fatally threatened, only for capitalism to reinvent itself ... Read moreand emerge stronger than before. The turning point for our most recent age of capitalism came on 15 September 2008 when Lehman Brothers collapsed, setting off market chaos which, had it not been for government bailouts and guarantees, would have toppled every bank in the Western world, an incident which set off the fourth major systemic transformation in capitalism's history - Capitalism 4.0. Understanding Capitalism 4.0 will be critical to the continued recovery of our global economies. In this controversial and wide-ranging book, Anatole Kaletsky, one of the world's foremost economic commentators, puts recent financial events into historical and ideological perspective. He describes the emerging features of this new capitalist model, explains how it differs from the previous versions - and how it will change politics, finance, international relations and economic thinking in the next decade. Show Less

About Kaletsky, Anatole
Anatole Kaletsky is Editor-at-Large of The Times, where he previously served as the Economics Editor and Associate Editor. Kaletsky began his career in journalism writing about business and finance for the Economist, and for twelve years worked at the Financial Times, where he served as New York Bureau Chief, Washington Correspondent, International Economics editor and Moscow Correspondent. He is a ... Read morefounding partner of GaveKal Capital, a Hong Kong-based financial boutique. He lives in London. Show Less

Reviews for Capitalism 4.0: The Birth of a New Economy
'Anatole Kaletsky is a brilliant economist and a gifted writer, a combination as valuable as it is unusual. Capitalism 4.0 will add greatly to our understanding of the future of global finance'
George Soros
`Anatole Kaletsky is one of the handful of heavyweight UK commentators who set the tone of public discourse on economic policy. His book goes ... Read morewell beyond typical comment to give an insightful analysis of the recent financial crash in a broad historical context'
Vince Cable
`Idiosyncratic, entertaining and contrarian'
Sunday Times
`A hugely ambitious and controversial account of the credit crunch which brilliantly traces the hotchpotch of economic theories that underpins it, and convincingly explains how it came to go so catastrophically wrong ... Kalestsky offers a genuinely new take on the credit crunch'
Literary Review
Show Less

Goodreads reviews for Capitalism 4.0: The Birth of a New Economy