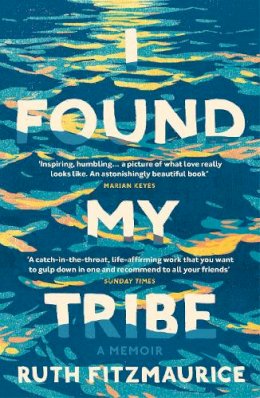 I Found My Tribe

Description for I Found My Tribe Paperback.
`I Found My Tribe is inspiring, humbling and a picture of what love really looks like' Marian Keyes An invocation to all of us to love as hard as we can, and live even harder, I Found My Tribe is an urgent and uplifting letter to a husband, family, friends, the natural world and the brightness of life. Ruth's tribe are her lively children and her filmmaker husband, Simon, who has Motor Neurone Disease and can only communicate with his eyes. Ruth's other `tribe' are the friends who gather at the cove in Greystones, ... Read moreCo. Wicklow, and regularly throw themselves into the freezing cold water, just for kicks. `The Tragic Wives' Swimming Club', as they jokingly call themselves, meet to cope with the extreme challenges life puts in their way, not to mention the monster waves rolling over the horizon. `Fitzmaurice tells her story in sparkling prose that is as sinewy as her new sea-strengthened body, and as admirable and boundless as her spirit', Sunday Times `Uplifting and life-affirming' Stylist Show Less

About Fitzmaurice, Ruth
Ruth Fitzmaurice was a radio researcher and producer when she married her husband, Simon, in 2004 and had three children. In 2008, Simon was diagnosed with ALS and given three years to live. Simon went into respiratory failure in 2010 and was accidentally placed on a ventilator during an emergency procedure. He decided against medical advice to keep the ventilator; ... Read moreRuth and Simon went on to have twins in 2012. She lives in Greystones, Ireland, with her five children, two dogs and two cats. Show Less

Reviews for I Found My Tribe
One of the year's most arresting, humbling and acute memoirs. It is a catch-in-the-throat, life-affirming work that you want to gulp down in one and recommend to all your friends. Fitzmaurice tells her story in sparkling prose that is as sinewy as her new sea-strengthened body, and as admirable and boundless as her spirit
Helen Davies
The ... Read moreSunday Times
I Found My Tribe is written with such lightness of touch that it's life-affirming, powerfully so. Yes, sometimes I was breathless from stabs of pain, but this book reads almost like poetry. In beguiling, luminous words Ruth tells her story in a seemingly scattergun way... as the overall picture builds up like a mosaic made from shiny beautiful things... I Found My Tribe is inspiring, humbling and a picture of what love really looks like. An astonishingly beautiful book by an astonishingly beautiful person
Marian Keyes Uplifting and life-affirming, this is a manifesto to live as hard and as well as you can
Stylist
A powerful, emotional, poetic, funny, philosophical and courageous work of art ... a joyful, raw, urgent invitation to her readers to 'just dive'
into the sea, and into life. Dive in, she urges, no matter what horrors life flings your way
Irish Times
Ruth Fitzmaurice's beautiful book is an enraptured cry at life's gifts and griefs ... Life-affirming and full of love, this book is a clarion call to live life to the full: to dive in for a swim and be brave
Book of the Month
Psychologies Magazine
Fitzmaurice's brilliantly lyrical ear and gentle humour makes this a none-too-distant relative to the likes of Joan Didion and Cheryl Strayed
Irish Independent
A vivid and beautifully written work, that chronicles a life of joy and frustration and coping and celebration and swimming against the tide and all those points in between
RTE Guide
This debut is set to become a global bestseller
The Diving Bell and the Butterfly meets Calendar Girls, with a splash of Roger Deakin. It is one of a number of recent books by women riding the crest of a wild-swimming wave. Fitzmaurice's memoir, though, is likely to be the one that exerts the greatest tidal pull
Helen Davies
The Sunday Times
Deceptively simple prose, laced with clever imagery, emotional complexity and heart
Roisin Ingle
Irish Times
A moving memoir of family life, coping with her husband's motor neurone disease and the icy joys of wild sea swimming
Best Non-Fiction
Good Housekeeping
Show Less

Goodreads reviews for I Found My Tribe